How to perform critical authorizations and SoD checks in SAP systems

This blog describes how you can set up the Segregation of duties (SoD) analysis for the SAP security concept. I compare 2 methods. The first one is using the standard SAP report RSUSR008_009_NEW and the second one is using CSI Authorization Auditor. 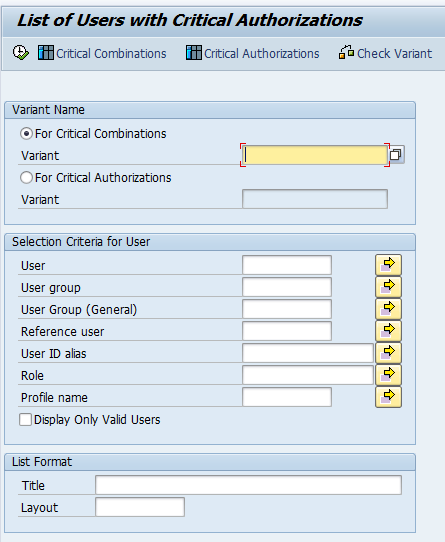 Figure 2: Set up of critical authorizations in report RSUSR008_008_NEW

After the rule set with critical combinations is defined, the report runs and the users are shown. Once again, a detailed analysis how a user gets the authorizations is not possible with this report and the information if a user did really use the transactions of the SoD conflict is missing (Figure 5). The Definition of SoD conflicts is only using AND logic.


Is it a useful report?

I will use CSI Authorization Auditor 2014 to show how an external tool can be used for SoD checking. CSI Authorization Auditor comes with a pre-configured rule set with all critical authorizations and over 400 pre defined SoD conflicts. Therefore the definition of critical authorizations and SoD conflicts from scratch is not needed. This is a real time saver. The rule set can be adjusted to company values, like customized transactions, authorizations, organizational levels, locked transactions, deactivated authority checks and more. The organizational values like company codes, sales organizations or plants can be easily added and used across the analysis. If you already have a pre defined rule set for the SoD conflict and critical combinations, this can be imported into the tool as well. Changes to the rule set are logged and can be restricted for changing. Additional information regarding the critical authorizations like the risk, control objectives and suggested controls can be added to the rule set as well. The SoD conflicts can be defined with various logics like AND, OR and even NOT logic. 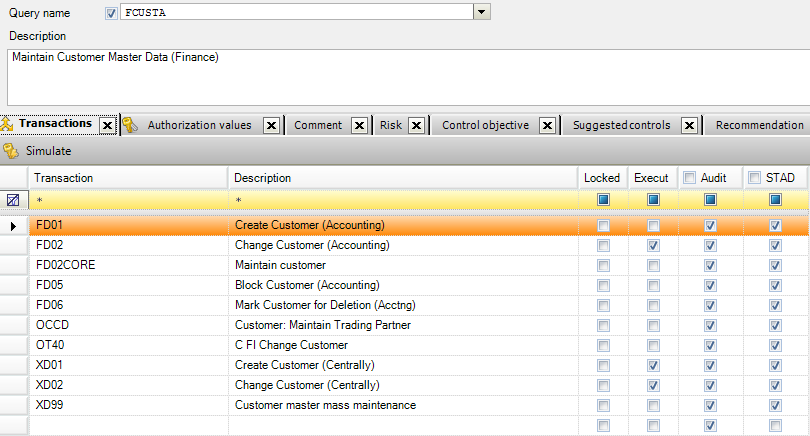 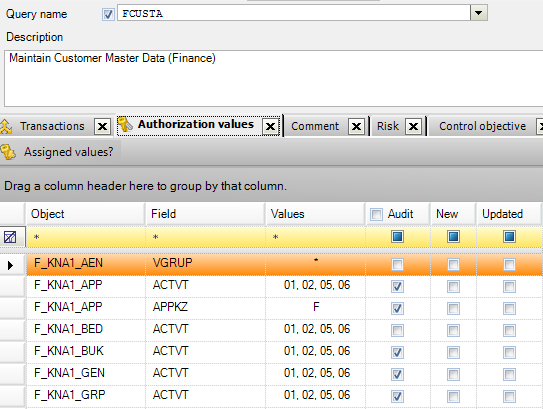 Running the queries will show the users/roles that have access to the defined critical authorizations. The result also gives more detailed information like how the users get access, via which profiles and/or roles. In the example picture below the yellow circles shows via which profiles/roles the transactions are assigned, the blue circles in figure shows via which profiles/roles the authorization values are assigned and if the user has executed the critical authorizations (red circles in Figure 7). In this example the user didn't execute (any of) the transactions for customer master data maintenance: XD01,XD02, XD99, FD02,FD05 or FD06.

To do the SoD analysis, a pre defined SoD rule set can be used or a new SoD rule set can be defined from scratch. Defining the SoD ruleset from scratch is very simple. Every critical authorization query is stored in a library and via drag and drop you can add queries to a SoD conflict. Additional information like the risk, recommendations, compensating controls or organizational levels that are applicable, can be added as well (Figure 8).

After the critical combinations are defined, the audit can be done. The report will show the users/roles having the SoD conflict together with very useful additional information; Is the conflict executed by the user, via which role(s) or profiles does the user gets the SoD conflict, is the conflict in the role itself?

Drill down detail reports (Figure 9), high level reports, dashboards and trending reports are also possible to get a clear overview of the progress of clean up (getting and staying compliant). Because the analysis is not done in the SAP system, there is no additional workload for the SAP server. 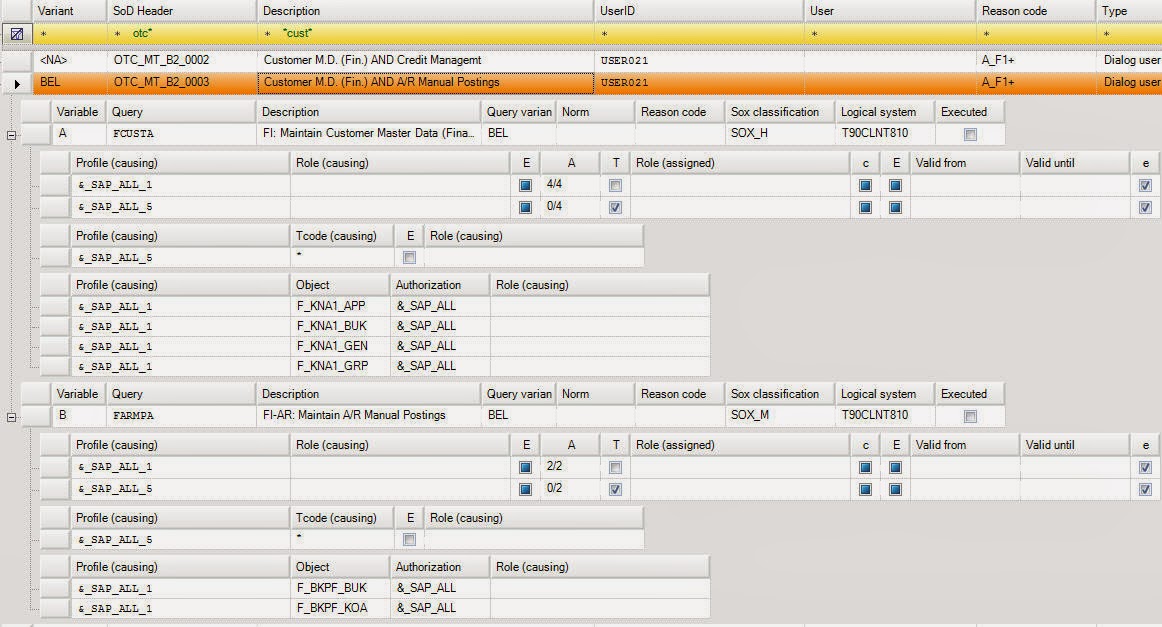 Defining the report RSUSR008_009_NEW will be a very time consuming and expensive job even if your SOD rule set is quite basic. Running the standard SAP report will take quite some time and will be additional workload for the SAP server. In the end it will be cheaper to buy an existing Security concept analyzing tool that offers more value because of the analysis functionality to get in compliance. Therefore I recommend to use external tooling like CSI Authorization Auditor.